Awards and Recommendations for James Packer 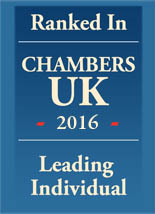 James is ranked as a Next Generation Partner in the 2022 edition of The Legal 500. They comment, "the 'outstanding' James Packer stands out for his expertise in judicial reviews and Court of Appeal cases, with a particular focus on immigration matters."

James is a Recommended Lawyer in the 2022 edition of The Legal 500.

"James Packer successfully filed claims against the Lord Chancellor and the Legal Aid Agency regarding the provision of legal aid, achieving a successful ruling for the backdating of certificates."

James Packer is a Recommended Lawyer in the 2019 edition of The Legal 500 for his work in Immigration: Human Rights and Overstay, London.

James Packer is listed as Recommended Lawyer in the 2019 edition of The Legal 500 for his work in Administrative & Public Law, London and is described as "...an outstanding lawyer who identifies points with ease and precision and thinks tactically."

Ranked and recommended by Legal 500 2017 as a notable individual for Public Law.

James Packer of Duncan Lewis & Co is praised by one source for being "very good at the minutiae, at understanding procedure with a very clear grasp of detail." Another notes him as "one of the most impressive solicitors in immigration work, running a high

Chambers & Partners Guides 2015- Immigration, London described James as 'Exceptionally diligent'. James has been recognised as a Leading Lawyer in the field of Immigration by Chambers UK 2014 & 2015 edition.

James is also personally recommended in Legal 500 in the immigration category where he described as a 'top-level performer' with an 'exceptional grasp of detail'.

James is recommended in Chambers and Partners for his effective advocacy before immigration tribunals.

Legal 500 2013 Edition.
Immigration: Human Rights, appeals & overstay / London
I am a Director of the Public Law Department at Duncan Lewis. I supervise a team of solicitors, trainees and caseworkers all dedicated to representing the most vulnerable in society. I have been consistently recognised in in both Chambers and Partners as "exceptional" and The Legal 500, 2019 edition as an "outstanding lawyer" who "identifies points with ease and precision and thinks tactically". I am a Recommended Individual in the 2019 edition of The Legal 500 for my work in Public Law and Immigration. I have previously been ranked as a ‘Leading Individual’ in Chambers & Partners for Immigration. I initially trained as a barrister (called to the Bar in 1999) - sharing the civil litigation prize at Bar School, and subsequently joined Duncan Lewis, initially in the advocacy team. I was soon appointed supervisor, and began to practise in judicial review. I cross- qualified as a solicitor in 2007. I am now a Solicitor-Advocate (with Higher Rights of Audience in Civil matters) head of department for Public Law, and a Director of the firm.

I litigate across a broad range of areas and regularly conduct test cases concerning issues that involve; access to the Courts, unlawful detention, enforced removals from the United Kingdom, challenges to decisions to refuse legal aid and associated litigation. I am also constantly involved in appealing costs decisions, usually to the Court of Appeal.

I have extensive experience of cases which have been decided in the Administrative Court, Court of Appeal and the Supreme Court. I have also brought successful challenges to the European Court of Human Rights.

I have regular conduct of major test cases at the highest level, including: - a challenge in the House of Lords - a test case concerning the approach where an application meets the Immigration Rules when made, but is refused because the Rules are altered before the application is considered, - a successful challenge to Legal Aid regulations preventing payment where the Respondent withdraws a decision after permission is refused on the papers, - a successful test case challenging the approach to the award of costs in j8udicial reviews where matters settle pre-permission, - a successful challenge to the operation of the ECF Legal Aid Scheme (for exceptional cases outside the ordinary Legal that he wished to return voluntarily in order that his return could be 'facilitated', I have have experience across the board in challenging detention on all sorts of bases including: SSHD failed to understand our client was British, in another case had a right of abode, in many cases had EC rights to remain, in other cases was unreturnable due to: medical conditions, country conditions or pending family court matters, challenges based upon our clients' mental health making them unsuitable for detention, and innumerable challenges to detention based upon fresh claims for asylum and trafficking issues.

I am frequently called upon in relation to; technical challenges to the powers of a court; adverse costs and other disciplinary communications from the Court, examples include; Additionally, I write articles for the leading Immigration Law blog Free Movement, as well as for other outlets including a leading article for the Solicitor’s Gazette. I have edited countless articles by other solicitors for publication, and I contributed the chapter on costs in the leading textbook ‘Criminal Judicial Review’ ed. Piers Von Berg. I assisted editing the e-book Costs in Immigration Cases (Colin Yeo). I have also appeared as a legal expert of Radio 5 (prisoner votes and the ECtHR), LBC (NHS charges for pregnant immigrants) and ABN (the Brexit cases). I am also a member of the Administrative Court User group which gives valuable insight into systemic issues.