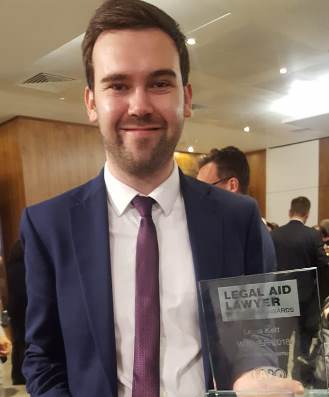 Duncan Lewis is pleased to congratulate Lewis Kett, a solicitor in the Public Law department, on his award for Legal Aid Newcomer at the Legal Aid Lawyer of the Year (LALY) Awards. The Legal Aid Newcomer Award exists to recognise the young legal aid lawyers aspiring to be the future leaders in this practice.

Throughout his time at Duncan Lewis, Lewis has developed a keen ability to bring difficult cases on behalf of vulnerable individuals, proving to be a dedicated practitioner in a wide-variety of high-profile cases.

Over the last year, Lewis has demonstrated his prowess in a number of challenges against the Home Office.

Lewis was a lead solicitor alongside legal aid firm Bhatt Murphy and the NGO Medical Justice, in litigation which challenged the Home Office’s definition of torture, which invalidated those who have suffered torture by non-state agents, when determining whether an asylum-seeker should be detained. Before the final judgment was heard, Lewis was successful in his application for an interim order which suspending this definition of torture, enabling hundreds of detainees to be released. In the final High Court judgment, it was ruled that the definition and policy was unlawful, exposing the fact that the ‘Adults at Risk’ policy has compromised the safeguards in place for vulnerable asylum-seekers.

Earlier this year, Lewis was a leading solicitor in the successful high-profile challenge challenging the conditions and “lock-in” regime at Brook House. The High Court ruled that the Home Office, in allowing these conditions, had discriminated against Muslim detainees. As part of the judgment, the court held that smoking inside the immigration removal centres had been unlawfully permitted for nine years, enforcing a nationwide ban on the practice.

In the first successful judicial review of segregation, Lewis challenged the Home Office’s practice of removing immigration detainees from association, by placing them in isolation, with the High Court ruling that it was in breach of detainees’ Human Rights.

Currently, Lewis is acting in a number of key public law cases. His main focus is challenging the Home Office’s approach to the detention of stateless persons. Last year, Lewis was part of a seminar held by the European Network on Statelessness (ENS) in Budapest, alongside a wide network of EU lawyers, politicians and NGOs. In addition, he has lodged a judicial review to challenge the failure of the Home Office to implement a judicial public inquiry into the abuse of detainees by detention staff at Brook House IRC, as seen in the BBC Panorama documentary.

Being recognised as a Legal Aid Lawyer at this years’ LALY Awards exemplifies Lewis’ commitment to representing the most vulnerable in society. He has received a number of other accolades in recognition of his outstanding practice. Whilst a trainee solicitor, in April 2016, Lewis was named the Times ‘Lawyer of the Week’. This was in response to his hard work in challenging the Home Office’s approach to asylum claims from former Afghan interpreters, prompting them to amend their policy guidance on Afghanistan to include interpreters as a specific risk factor.

Later that year, in October 2016, Lewis led a group of legal practitioners to the Calais ‘Jungle’ to support unaccompanied minors in their UK asylum applications under the ‘Dubs Amendment’, in a bid to pressure the government to fulfil its statutory obligations. The litigation is on-going.

Lewis is a prime example of what the LALY Awards exists to celebrate. He has entered the legal profession with a clear and admirable goal; to help those that need it most to gain access to justice.

“Legal assistance should be a basic right regardless of a person’s means or background; it is vital to ensure access to justice for all, and yet we have seen continuous cuts to legal aid by this government in several fields. Those we assist in immigration detention are often some of the most vulnerable people in society, and yet are hidden away from the world. Without legal aid they would be denied the opportunity to challenge their circumstances,” he states.

The 16th LALY Awards was brought by the Legal Aid Practitioners Group, a membership body which represents legal aid lawyers and those they assist, with a goal to raising awareness of the essential work done in enabling access to justice for all. The event was held on 17 July 2018 at etc. Venues Liverpool Street, attended by legal aid’s most established practitioners, and sponsors of the awards. The Legal Aid Newcomer Award was sponsored through crowd funding supported by the friends of LALY.

Lewis had this to say following his win:

“It was an honour just to be nominated and recognised alongside such brilliant peers, but to win was an incredible surprise. It was great to be involved in an event that championed the importance of legal aid and those who work tirelessly under it. Although this was an individual accolade, I would not have gotten to where I am without the support of great colleagues that I work alongside every day.”

We at Duncan Lewis commend Lewis on his achievement and congratulate all other award winners as well as those shortlisted at the LALYs 2018.