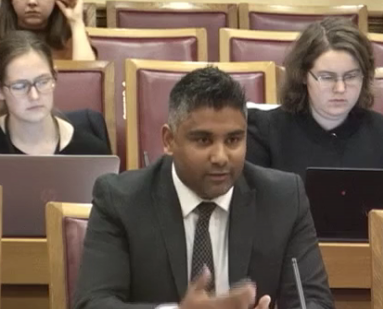 The session, which was transmitted live across the internet, was also attended by Amanda Weston QC and Stephanie Harrison QC, both of Garden Court Chambers and Laura Dubinsky of Doughty Street Chambers.

“Access to legal assistance is critical in relation to immigration bail and to applications that detainees have to make while in detention.”

He also highlighted the complexities of immigration law;

“I find absolutely impossible the idea that detainees should be brought before the tribunal, either through video link or in person, to present their case for bail without a lawyer. It simply would not work. Even when detainees have access to lawyers in relation to bail and other applications, we find that there are not enough lawyers to provide access to.”

“There is a lot of work at risk because of the legal aid cuts.”

A further matter discussed was the availability of legal aid to those in detention. Toufique divulged his concerns with cuts to legal aid;

“…it takes a lot of effort [to represent detainees]…and it takes financial resources…experts provide medical evidence and experts on country information, and you need to pay those experts. You need to apply for disbursements from the LAA [Legal Aid Agency], but you need to take a financial hit before you can recoup that money. There is a lot of work at risk because of the legal aid cuts.”

“Judicial review can potentially obtain an injunction to stop the removal and challenge the legality of that fresh claim refusal,” he explained to the panel. “If that person succeeds in his or her judicial review in challenging the fresh claim, often the Home Office has to make a new decision, and make it lawfully. That can also, if it is a protection claim, lead to an appeal. Ultimately, then, an appeal would lead to leave to remain if that person succeeds. The appeal eventually paves the way for status in the UK, but judicial review prevents that person being removed prior to potential success down the road.”

“It was a huge honour to have been invited to give evidence to the Committee. As the only solicitor on the panel, it was a rare and valuable opportunity to convey to Parliament real world examples of the human cost of immigration detention, and to stress the crucial role of legal aid in enabling some of the most disenfranchised members of our society to access justice.”

The full video of Toufique’s evidence giving is available on: https://parliamentlive.tv/event/index/7cd35fc9-9a8a-4717-af2c-dcee4ea41a9a

A full transcript can be accessed here: http://data.parliament.uk/writtenevidence/committeeevidence.svc/evidencedocument/human-rights-committee/immigration-detention/oral/92861.html

The public law team has experience in all aspects of judicial review claimant work, including obtaining emergency orders and other interim relief to prevent breaches of human rights, following up judicial reviews with actions for damages in both the County and High Court and successfully pursuing judicial review matters to the Court of Appeal and Supreme Court. A particular focus is the team’s work handling cases of the deprivation of British citizenship and deportation threats, with a niche specialism in challenging the treatment of immigration detainees and other marginalised communities.