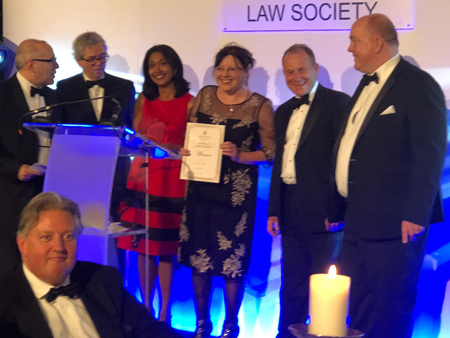 We are delighted to announce that we have won the Excellence in Access to Justice Award at this year’s Cardiff and District Law Society Awards.

Open to firms practicing in the Cardiff and District area, the Excellence in Access to Justice Award celebrates those that go above and beyond the call of duty in order to combat the prevailing issue of ordinary people struggling to access justice due to the growing gaps in provision of services.

As the largest provider of legal aid across England and Wales, with our motto “we give people a voice” we aim to ensure that those that are most vulnerable and marginalised in society are able to access the justice they are entitled to. Further, our teams at both the Cardiff and Swansea offices are involved in multiple pro bono projects, assisting some of the most vulnerable clients, in association with a number of organisations to widen our reach.

The housing department, for example, is involved in numerous pro bono initiatives, including the weekly Housing Pro Bono Surgery at Cardiff Civil Justice Centre, a scheme run in association with the Personal Support Unit which has provided invaluable assistance to over 300 vulnerable clients. Housing director Lynda Reid has established an additional two pro bono surgeries taking place in Citizens Advice Risca and Blaenau Gwent, some thirty miles from the centre of Cardiff in areas where access to justice is scarce. Her work has had a positive impact on hundreds of clients who were previously at a considerable disadvantage.

Our Cardiff based immigration department also plays a vital role in enabling access to justice, specialising in public law, immigration and asylum matters in South Wales. Headed by director, Vinita Templeton, the team not only provides an exceptionally high-quality service to clients but also contributes greatly to the pro bono work carried out in the area, representing a client pro bono in an application to the Supreme Court.

Vinita has also been working with Movement for Justice, taking on significant pro bono work in relation to the Windrush issue. As something that is affecting individuals nationwide, Vinita is providing essential advice to those who have been let down by the immigration system to ensure they do not go without support.

Directors Lynda and Vinita attended the prestigious awards ceremony at the Exchange Hotel in Cardiff Bay last Friday night. It was a night to remember and we are thrilled to have our commitment to clients, legal aid and pro bono work recognised and rewarded.