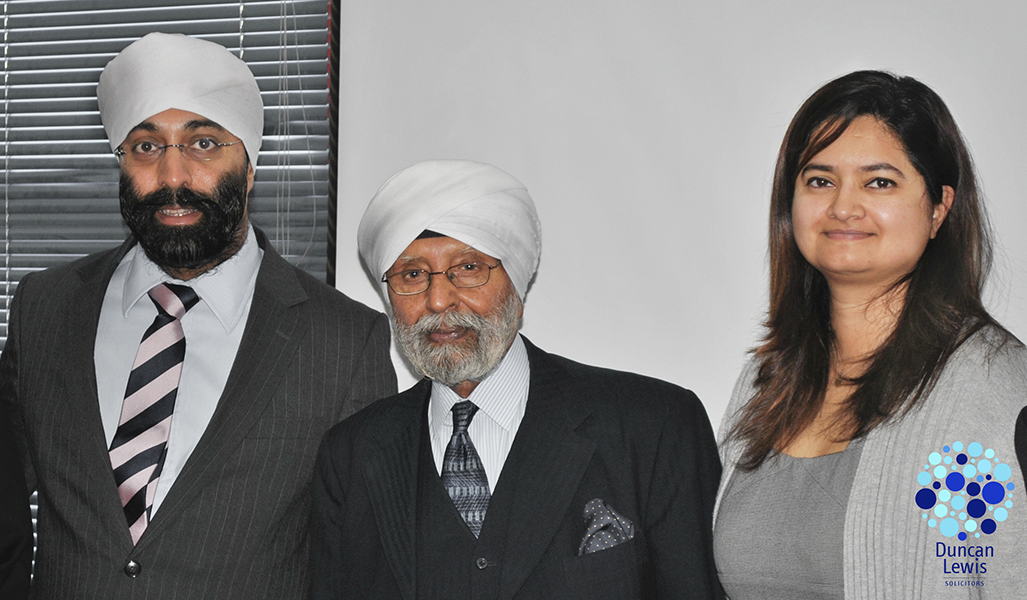 His Honour Sir Mota Singh QC was the first ethnic minority Judge to sit on the English Bench. In 1967 Singh joined the English Bar and was appointed to the bench in 1982. He was the first Judge to wear a turban instead of the traditional horse hair wig in court. In 2010, he received a knighthood from the Queen, the highest civilian honour for his services to the Judiciary and for his charitable and community work. Singh was the first Sikh QC and is regarded as a highly regarded and pioneering figure for ethnic minorities within the legal profession.

Singh visited legal solicitors Duncan Lewis’ Harrow office on the 12th of November 2013. He had a profound impact on the company, inspiring our workforce and having a lasting effect on the diverse and unique company ethos at Duncan Lewis.

CEO Shany Gupta comments that “we were saddened to hear that Sir Mota Singh QC passed away over the weekend aged 86. Sir Mota Singh was a man of strong values not only in his work ethic but as an ambassador for lawyers, and has been held in very high regard for many years by those in the Sikh and ethnic minorities.”

Sir Mota Singh came to spend the day at Duncan Lewis on 12 November 2013 and CEO Shany Gupta has paid the following tribute, “it was a real privilege to meet Sir Mota Singh. He provided a real inspiration for individuals like myself and other ethnic minority lawyers in the legal profession. His services to the Judiciary and the community were of a standard that most of us can only aspire to and while he was such a humble man to meet, he leaves a very strong legacy behind. We pass our condolences to his family and friends."

Singh was born 1930’s Nairobi, Kenya. He was sixteen when his father, Sardar Dalip Singh, passed away. He was forced to leave school in order to look after his family, which included his widowed mother, who was only 32 at the time, and his five younger siblings. Mota Singh’s school teachers, knowing that he was gifted, convinced his family that he should complete his matriculation. So whilst looking after his family during the day, the judge pursued his Bar studies at night and in 1953, came to England to complete the second part of his studies.

Upon returning to England in 1965 and, after a period as Assistant Legal Advisor to a group of British Companies and went into Chambers in 1967 to practise at the Bar. He was appointed a member of the Race Relations Board by the Home Office shortly after; a post that he held for the next 12 years.

Within 11 years of coming to the Bar, his Honour Sir Mota Singh QC was appointed a Deputy Judge, Queens Counsel, a Recorder of the Crown Courts and a Circuit Judge; this being the first appointment of this position to a member of a minority ethnic group.

His Honour Sir Mota Singh QC's retirement twenty years later was marked by the Lord Chief Justice of England, who acknowledged “his unique services to the administration of law in our country”.

Since his retirement from the bench, his Honour Sir Mota Singh QC has served as Chairman of the Disciplinary Committees of the Royal Pharmaceutical Society of Great Britain; and then judicial member of the Parole Board upon leaving the previous office.

His Honour Sir Mota Singh QC is the holder of positions of Chairman, Patron, Trustee and Member of a number of charitable institutions, and has lectured at a number of national and international seminars on pluralism, multiculturalism in society, religion and interfaith relations.

Singh has been the recipient of a number of lifetime achievement awards; in the New Year honours list 2010 his honour was knighted for his services to the administration of justice, community relations and the voluntary sector, and is the first member of the Sikh faith to have been so honoured.

Duncan Lewis pays tribute to Sir Mota Singh and the great achievements and progress he made in his own life; as well as the positive impact he had on the lives of others.