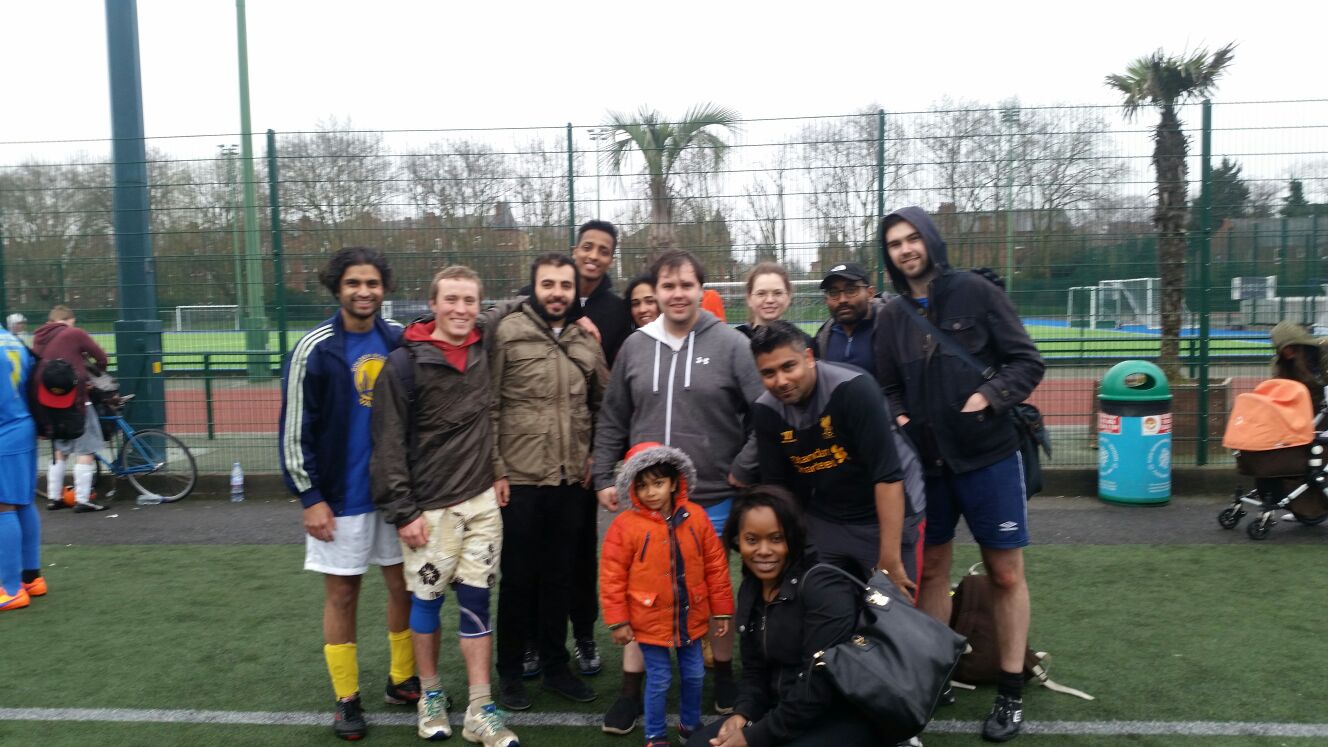 Duncan Lewis Solicitors took part in the London Play 2 Remember football tournament on the 2nd April 2016. The tournament marked the 7th April start of 100 days of remembrance for the 1994 Rwandan genocide against the Tutsi, as well as the United Nations International Day of Sport for Development and Peace (IDSDP) on 6 April, and is being arranged by the organisations Football for Hope, Peace & Unity (FHPU) and Waging Peace.

In this article, Duncan Lewis Public Law Trainee Solicitor Jamie Bell provides a fun and gripping match by match account of the trials and tribulations faced by the Duncan Lewis teams.

When Duncan Lewis Solicitors Team 1 looked across at their first opponents, the young, fit and organised Team Rwanda UK they thought that their participation in the 2016 Play 2 Remember Tournament would be short lived.

However, surprisingly the injury ravaged Duncan Lewis team, wearing mismatched kit, shocked Team Rwanda to take away a deserved 2-0 victory. Ahmed Aydeed stretched out a leg to collect a raking through ball and smashed it past the Rwandan keeper. Jamie Bell (the author of this article) converted a half-volley from midrange to start the tournament on a fine note. A fine defensive display by Raza Halim (our guest for the day from Garden Court Chambers) and the leggy duo of Ahmed Aydeed and Lewis Kett helped to protect the Duncan Lewis goal and secure the clean sheet.

Meanwhile after a peerless performance, goalkeeper Raja Uruthiravinayagan complained about a painful finger after a heavy challenge. It later transpired that he had broken it, but the hero that he is continued to play on. After both achieved victories in their opening games, the scene was set perfectly for the fierce grudge match between Duncan Lewis and Wilson LLP. The injury curse struck again as Ahmed Aydeed was forced to rest his aching knee and start from the bench. The coherent Wilson team shocked Duncan Lewis by taking a two goal lead. Only the performance of the wounded Uruthiravinayagan prevented further goals.

However, an double salvo by talisman Toufique Hossain, the second of which was a mazy run which dazzled the Wilsons defence meant that suddenly Duncan Lewis were level. Yet after working so hard to get back on terms, disaster struck as a blocked clearance spun out to a Wilson’s striker who fired home for the winner. Wilsons embarked upon industrious tactics to play out the game with no further score.

It was a disappointing result but Duncan Lewis’ spirits were lifted after cheering on Team Rwanda to victory over Wilson.

Spurred on by this result, Duncan Lewis romped to a convincing 5-0 victory over their final group opponents inspired by the deadly duo of Toufique Hossain and Lewis Kett. The highlight perhaps was the injured Aydeed leaving his position as replacement goalkeeper to inexplicably back heel a simple pass wide in front of the goal.

The crushing victory meant that Duncan Lewis qualified for the semi-finals, topping the group ahead of Wilsons on goal difference. Meeting them would be ‘Free the Miners’. The team was set up with Ahmed Aydeed resting his knee in goal, ringer barrister Raza Halim and the combative Raja Uruthiravinayagan in defence, Lewis Kett and Jamie Bell playing in midfield with Toufique Hossain leading the attack.

After a disappointing start, Duncan Lewis fell behind by two goals. The frustrated team felt that the game and the tournament was fizzling out to a disappointing defeat. Aydeed and Uruthiravinayagan switched positions with the goalkeeper returning the guard the DL goal with a broken finger and Aydeed fighting through the knee pain to play out on pitch. However, just before half-time Jamie Bell gave DL a lifeline with what he describes as a ‘wonder-goal’, chesting down a long pass from Lewis Kett and half-volleying the ball past the Miners keeper a long way out of his goal.

The Free the Miners responded to the DL pressure by grabbing a third goal, an unfortunate deflection taking the ball past Uruthiravinayagan. Instead of letting heads drop, Lewis Kett took matters into his own hands, going on a remarkable dribble from kick off past the entire Miners team and unselfishly squaring it for Hossain to bring the gap back to one.

Duncan Lewis would have one final golden chance to square the game, leading to a semi-final shoot out. A long ball by Lewis Kett was taken down by Toufique Hossain. Through on goal, Hossain only managed to hit the legs of the Miners keeper after he had rushed out to confront him.

In the other semi-final Team Rwanda 1 were able to overcome Wilsons on penalties. They would go on to defeat Free the Miners in the final. They were a popular and worthy winner.

Duncan Lewis Team 2 had a somewhat less successful tournament but it was the participation that counted. They were cheered on from the terraces and managed to score a good number of goals. Helen Cummings showed some true bravery in goal, whilst Patrick Page was combative in midfield. Sharif Khan definitely proved he was more of a cricket man but fought valiantly for the cause. Joshua Chua was enthusiastic as ever producing some fancy skills out wide and Mabast Jaf covered the pitch industriously in every game. The true highlight was Rohena Wallace playing in goal while holding an umbrella; leaving the opponents baffled. The bemusement was compounded when she left her umbrella and ran on to the pitch brutally tackling a Sudanese/Waging Peace forward: the umbrella was clearly a ruse.

The tournament drought and pattern of close heroic defeats continues for this Duncan Lewis team. More important than victory (yes more important than victory) was the wonderful ethos and spirit that the tournament was played under. Refugees, Lawyers and NGOs came together in this inspiring event to show solidarity and support for the millions around the world who have been forced to leave their homes fleeing danger and persecution.

Duncan Lewis will return next year to try to go one step further and take the trophy.

About the Author: Jamie Bell

Jamie is a trainee solicitor in the Public Law/Immigration department. He is accredited as a Level 2 Senior Caseworker under the Law Society Immigration and Asylum Accreditation Scheme.

Jamie has performed a key role in a number of high profile judicial review matters. These include judicial review claims challenging false imprisonment, challenges against the refusal to accept further representations as a fresh claim, refusal to grant exceptional funding, claims relating to the client’s fitness to fly and various other claims relating to unlawful actions by the Secretary of State. As part of these challenges, it has been frequently necessary to obtain emergency injunctive relief to prevent the client’s removal from the United Kingdom, including out of hours applications at night or during the weekend.

Jamie has assisted solicitors in a generic challenge to the Detained-Fast Track system, specifically referring to the failure of the Secretary of State to follow their policy regarding ‘vulnerable’ claimants, including those who had been victim of torture. Prior to the scheduled hearing, the Secretary of State conceded the claim in its entirety and shortly afterwards, the Immigration Minister announced the suspension of the Detained Fast-Track system.

Jamie has also assisted a solicitor in an appeal in the Special Immigration Appeals Commission challenging the deprivation of the Appellant’s citizenship. As part of this high profile case, Jamie has attended proceedings in the Commission, liaised and assisted Queen’s Counsel and Special Advocates and prepared detailed and complex evidence with the client to assist him in the ‘open proceedings’.

Jamie is part of the legal team that has embarked upon a series of judicial review claims challenging returns to Afghanistan. As part of the generic challenge, Jamie assisted with the preparation of over twenty judicial review applications prior to charter flights on 10 March 2015 and 21 April 2015. This involved taking instructions and considering documents in extreme time pressures. These claims resulted in injunctive relief for the vast majority of the applicants for the first charter flight and all applicants for the second charter flight. Generic relief suspending the removals of all ‘vulnerable Afghans’ was granted on 21 April 2015 by the Court of Appeal, a decision which was upheld and continued prior to the flight due to depart on 25 August 2015.

As part of his work, Jamie has written press releases and has directly corresponded with journalists from publications such as The Guardian, the BBC, the Independent and politics.co.uk, leading to the publication of numerous stories relating to his work. Jamie has also appeared on television for Russia Today with regards to the removal of people to Afghanistan.