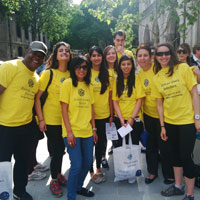 Duncan Lewis Solicitors joined over 8,000 other walkers in London’s legal professions in taking part in the 10 year anniversary London Legal Walk on Monday 19th May 2014.

Thousands of participants scaled Central London for the 10km walk, beginning at the Royal Courts of Justice and ending at Hyde Park for the London Legal Walk 2014. The event, now in its tenth year, was organised to raise money in support of free legal advice charities in London and the South East in a time where Legal Aid contributions have choked many not-for-profit free legal advice agencies into non-existence.

In a statement on the organisation’s website, the inspiration behind such is fuelled by their ethos;

“Access to justice should be equally available to everyone, regardless of their financial situation. This principle is at the cornerstone of the legal justice system in England and Wales. In practice it is not the case.”

Last year over 7,500 participants took part in the event which raised over a staggering £530,000. This year the organisers aimed to make it the “biggest and best ever walk” in the event's history; which seems to have been an objective achieved with the greater number of participants this year.

Duncan Lewis Solicitors, who have branches across London, are regular participants in the event. Members of the Duncan Lewis Solicitors who took part in the walk included; Civil Litigations Director Anthony Okumah, Civil Litigation Solicitor Shilpa Sehgal and Housing Department Solicitor Shabana Masood amongst others. Last year the firm raised an impressive £801.29, and aimed to beat this in this year's walk.

In a statement on the London legal Support’s website, Lord Justice Briggs said the event was;

“A thoroughly enjoyable walk, the marshals were excellent, and the whole experience an uplifting delight” in a statement on the London Legal Walk 2014 website.

“It was exhausting, tiring but uplifting knowing why we were doing it; in order to support not-for-profit free legal advice agencies who are now overwhelmed due to the drastic legal aid cuts”