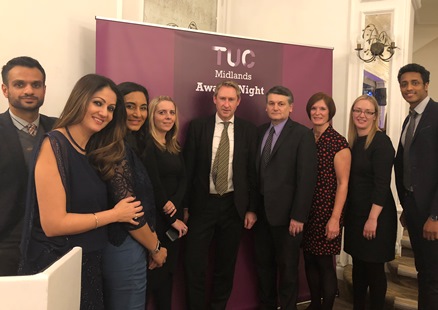 The Trade Union Congress is a national trade union centre, a collection of trade unions in England and Wales representing the majority of trade unions. Led by General Secretary Frances O’Grady, the TUC believes that unions are stronger when they join together. For 150 years unions have been fighting for safe workplaces and wages that a life and home can build upon, today the TUC strives to ensure that every job is up to standard and that everyone at work is treated with respect. Jointly 5.5 million working people are brought together by the TUC making up 51 member unions.

It was our privilege to present the final award of the evening ‘Campaign of the Year’. The University of Leicester’s ‘Campaign against Mass Compulsory Redundancy’ was Highly Commended and it was Unison Birmingham’s Homecare Enablement workers who won the coveted award for their ongoing battle against pay cuts, which has seen an inspirational group of predominantly female workers embark on an industrial dispute which has lasted over a year. Duncan Lewis’ Nilma Shah presented both awards, giving a speech that highlighted the work both campaigns have done over the course of the year.

The event was a huge success and was attended by over 500 people, including the TUC’s General Secretary, Frances O’Grady and campaigner for young workers’ rights, Lauren Townsend, who gave an inspirational speech, recounting her experience of working as a waitress in a chain restaurant and ultimately going on strike to ensure that she did not have to pay for work uniform, received paid training and for tips to be distributed fairly among workers.

Nilma, who presented the awards, reflected on the evening’s success;

“The evening was empowering and inspirational and we will continue to support the trade union movement in years to come.”

We are extremely pleased to have been involved in such a worthwhile cause and offer congratulations to all the winners at the awards ceremony.