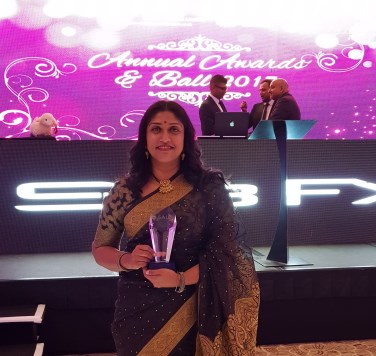 The Society of Asian Lawyers (SAL) aims to promote and develop the legal profession in the Asian community within the UK. SAL’s prestigious flagship event, the Annual Awards & Ball 2017 took place on Saturday 28th October 2017 in London. At the heart of this night there are four awards, the Lifetime Achievement Award, Criminal Lawyer, Commercial/Civil Lawyer and the Rising Star Award, which are presented to individuals that have been recognised to have excelled in their chosen fields.

Immigration and Public Law Solicitor Krisha Prathepan works phenomenally hard for her clients, most of whom are asylum-seekers facing the bleak prospects of detention and removal. This diligence has borne fruit in a staggering success rate, despite the work being carried out under legal aid - with all its concomitant risks and challenges.

In the case Ibrahimi & Abasi Krisha won a key case blocking the forced return of asylum-seekers to Hungary. It was held that her clients would be at ‘significant risk’ of refoulement back to Iran if they were to be returned to Hungary, where abuse of migrants has been widely reported. This remains the only successful UK litigation to result in a generic ban on returns to an EU country under the Dublin Convention.

Krisha is similarly relentless in fighting unlawful detention. In IKM Krisha instructed a challenge to the detention of a non-Arab Darfuri fleeing Janjaweed militias. Reported as the headline story in The Independent, the team were able to show that the Home Office had detained this client despite knowing that she was a victim of torture and rape. The Judge found the Home Office behaviour to have been ‘utterly unreasonable and truly, in my judgement, disgraceful.’

This August, Krisha instructed in YA, where, again, she exposed the failure of the Home Office to identify the client, this time an asylum-seeker from Chad, as a potential victim of torture. He had been wrongly detained under the accelerated Detained Fast-Track process. The Judge found, ‘without hesitation’, that his detention was unlawful.

Krisha is a civil lawyer without borders. In October last year she spent several days in the Calais ‘Jungle’, taking instructions pro bono from minors, in order to represent them in their applications to be relocated to the UK under the ‘Dubs Amendment.’ Krisha has been the solicitor with conduct of the ensuing litigation, ZS (A Child). Undeterred by linguistic and bureaucratic barriers, she has been fighting to ensure the welfare of the lead claimant, who remains in France, suffering from severe mental health problems.

Krisha’s fierce commitment to her clients is indefatigable. Her practice places her within the sharp focus of the higher courts and indeed powerful government departments. Krisha’s successful pursuit of justice, under this intense scrutiny, reflects a level of excellence and fortitude that is rare to find in combination.