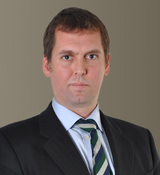 Duncan Lewis Solicitors are pleased to announce that Director of Public Law Adam Tear has been nominated for the Law Society Solicitor Advocate of the Year Excellence Award for the third consecutive year running.

Adam's 2015 shortlisting in the Law Society Excellence Awards sees him receiving the impressive nomination for the third year running, following him winning the award in 2014.

Adam stated in regard to his nomination;

“I am very pleased to be shortlisted for the third year running for Solicitor Advocate of the Year. I feel that my short listing underlines my continued commitment to develop my advocacy and to achieve the highest standards before the higher courts.”

Adam challenges public authorities both as a solicitor and as an advocate, in a wide area of law; spanning the areas of Public Law, Immigration and Civil Liberties & Human Rights.

Adam is qualified under the Immigration & Asylum Accreditation Scheme as a Level 3 Advanced Caseworker and Supervisor which is the highest level of accreditation in the Immigrationand Asylum Accreditation Scheme (IAAS).
Adam further specialises in prison law cases, and other challenges to authorities were no right of appeal exists. Adam has a developed practice in Regulatory law, having represented a number of professionals in dealings with professional bodies.