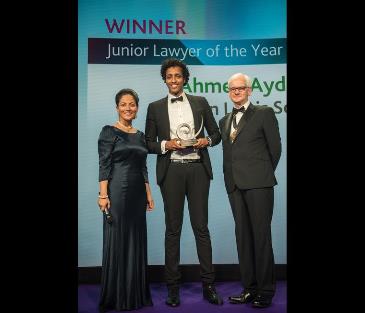 We are delighted to announce that 4 of Duncan Lewis’s leading solicitors were recognised for their hard work in the past year at the annual Law Society Excellence awards, with Public Law Director Ahmed Aydeed taking home the gold as the 2017 Junior Lawyer of the Year.

Duncan Lewis Solicitors would like to congratulate Ahmed Aydeed for his award. Since qualification in May 2015, Ahmed’s career has accelerated, having become a Director in July of this year. He has worked tirelessly to challenge unlawful detention in complex, high-profile cases, which have led to decisions positively impacting thousands of detained asylum-seekers. Recognition of his efforts is therefore highly deserved.

All at Duncan Lewis are immensely proud to see our solicitors commended for their important work in the legal sector, and we have no doubt that they will continue to be shining lights in a profession in which it often proves challenging to stand out amongst the crowd.

A summary of our shortlisting at the Law Society Excellence Awards 2017 can be found below: