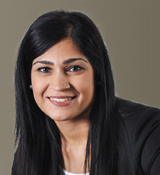 Duncan Lewis Solicitors is pleased to announce that Director Krina Parmar has been recognised by Chambers UK 2016 as a Leading Up and Coming Individual for her Family and Childcare work in Birmingham and the surrounding areas.

Following the releases of the Chambers & Partners Guides UK 2016 Edition, Duncan Lewis Solicitors are pleased to announce that Family & Childcare Director Krina ParmarKrina Parmar has been recommended as a Leading up and Coming Lawyer in her field of Family Matrimonial & Childcare Law for Birmingham and the surrounding areas.

“Krina Parmar handles both private and public family law matters, and is highlighted for her expertise in areas such as forced marriages and international child abduction. She is based at Duncan Lewis & Co.”

Krina Parmar, head of her legal department and also a member of the Law Society Children’s Panel, specialises in all aspects of Public and Private Law Children matters from the company’s Birmingham and Leicester offices. She holds expertise in international child abduction matters, forced marriage applications and in assisting clients presented with emergency situations such as removal of children or domestic abuse.

Specialists in all aspects of ffamily and private children law matters, the department holds a niche practice in representing victims of domestic abuse and are significantly experienced in complex financial matrimonial matters (ancillary relief) relating to the breakdown of a marriage/relationship. With a broad practice representing parents, family members and children through their children’s guardian in all children public law proceedings and conducting cases on behalf of the official solicitor, the Duncan Lewis’ Family & Childcare team are also specialists in high profile international child abduction cases, with an extensive practice in inherent jurisdiction/forum disputes, international relocation cases and wardship proceedings for the return of children. Since 2013, Duncan Lewis has an established Islamic & Sharia Law team which specialises in Islamic Divorce, Islamic Financial Settlement & Mehr Claims under English Law.