HomeAina Khan’s “Register Our Marriage Roadshow” at the Daughters of Eve Bradford Sunday 3rd May 2015 2.30pm 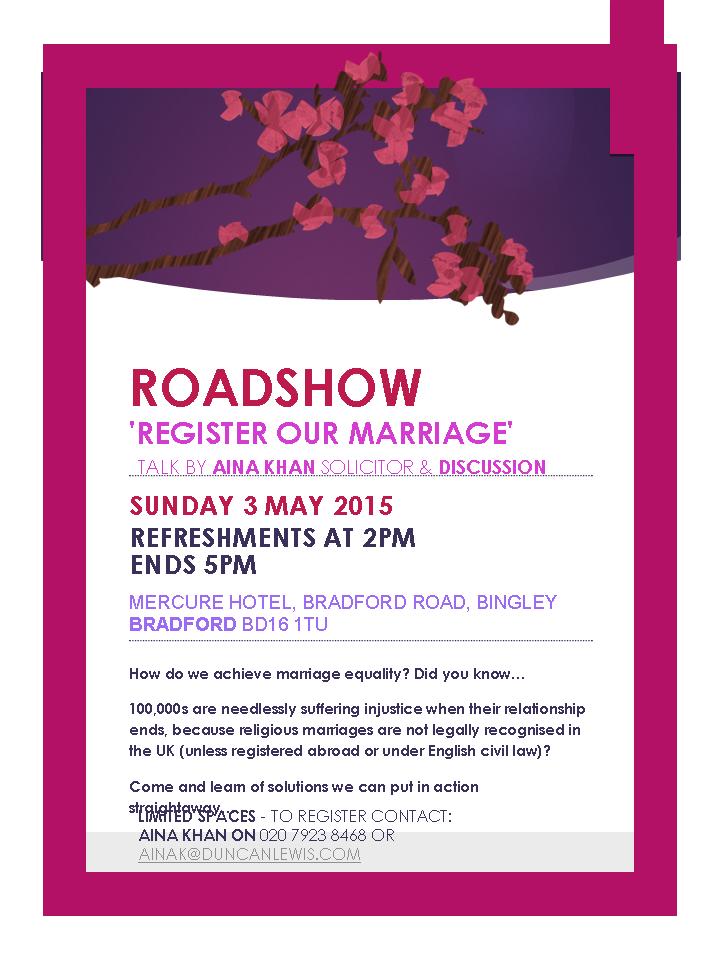 Aina Khan’s “Register Our Marriage Roadshow” will be taking place after the Daughters of Eve conference at the Mercure Hotel from 2.30 to 4.30pm on Sunday 3rd May 2015 at Mercure Bradford hotel, Bradford Road, West Yorkshire, Bingley BD16 1TU. This is a free event for both men and women, interfaith and non-political.

The Daughters of Eve 2015 conference by the Muslim’s Women’s Council is titled “Human Rights, Human Wrongs: Muslim Women Creating a New Narrative”. The conference will include expert panellists, debates and more. Aina will be speaking on Saturday on Legal Rights of Muslim Women. This will be followed on Sunday by the Road Show, with Aina's speech on unregistered religious marriages and a discussion.

Aina Khan’s “Register Our Marriage” roadshow hasalready seen successful turnouts throughout the UK. As part of her 'Register Our Marriage' project she will discuss the importance of registering marriages in the UK. It is estimated that around 80% of young British Muslims are in unregistered marriages and that this is growing rapidly.

As a consequence of this, many couples are left with no legal rights upon divorce or to inheritance and pension rights. Given the shocking deficiency in quantitative and qualitative data, intellectual paralysis has set in.

With this in mind, Aina Khan, initiated roadshows around the UK to facilitate reform by Muslims themselves, by way of ‘Ijma’ (consensus) and ‘Ijtihad’ (rational analogy).

As part of the 'Register Our Marriage' Roadshow, a set of distinctive and innovative mechanisms are to be put in place to address the situation;

a) A wide-ranging survey on Surveymonkey on Muslim marriage and divorce (launched on 30 September 2014) . See link here.

g) Setting up of local ‘Women only’ Sharia Councils to grant Islamic divorces to women who do not have the power of divorce given in the Islamic marriage contract.