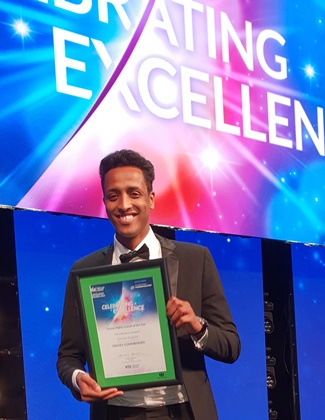 As the youngest appointed director at Duncan Lewis Solicitors, heading the Public Law department in Birmingham, Ahmed continues to be at the forefront in the battle against the unlawful practices employed in immigration detention today.

Ahmed joined Duncan Lewis in 2012 and has established himself in a broad range of Public Law matters. In particular, he specialises in cases relating to public law and human rights matters, including asylum, international protection, EU law, nationality law, administrative detention, discrimination and equality. His dedication to the preservation and promotion of human rights has been demonstrated by the key public law challenges he has led, resulting in decisions that have benefited thousands of vulnerable asylum seekers.

It is this expertise and commitment to his practice which has won him recognition at this year’s Excellence Awards.

Ahmed had this to say in response to this recommendation:

“I’m grateful to the Law Society for this high commendation, and for recognising the importance of defending the rights of refugees, detained migrants and victims of modern slavery. In turn, recognising the importance of legally aided public law work, as without it, my clients would have no recourse to justice. It is a privilege to represent my clients, who have been marginalised by the hostile environment and severe legal aid cuts.”

On the night Duncan Lewis received high commendation for two different categories. Ahmed, for Human Rights Lawyer of the Year, and the firm as a whole was commended as Law Firm of the Year – Large. This particular category was sponsored by Accuity and indicates the significant work our legal practitioners are doing for the betterment of the firm as a whole. We were also shortlisted for Excellence in Business Development and Excellence in Diversity & Inclusion. As the largest legal aid practice in the UK, we are proud to be able to continue to help the wide variety of communities we serve.

Practice Manager, Jason Bruce, on our high commendation for Law Firm of the Year:

“It is a privilege to be highly commended for Law Firm of the Year at this year’s Excellence Awards. We are committed to “giving people a voice” and have worked tirelessly over the last year to expand our reach and tackle the inequality that exists in terms of access to justice. We are thrilled that the work we have undertaken to ensure the provision of top-quality legal assistance to all of those seeking justice has been recognised and celebrated.”

We would like to congratulate all the winners from the night and everyone that was shortlisted. We would also like to thank The Law Society for the fantastic event, bringing together all legal practitioners from consultants, in-house teams, charitable organisations, to legal aid firms, to champion their outstanding achievements in law.

The Law Society is an independent body for solicitors designed to support, represent and promote the profession. There are a number of ways that they do this; including hosting The Law Society Excellence Awards to celebrate the achievements of solicitors who are truly excelling in their profession.

This year was the 12th annual awards, held at the Grosvenor House Hotel on Park Lane, London. All number of attendees representing the legal sector from across England and Wales were there to congratulate those that were shortlisted in anticipation of the ceremony announcing those the judging panel deemed the winners in each category.