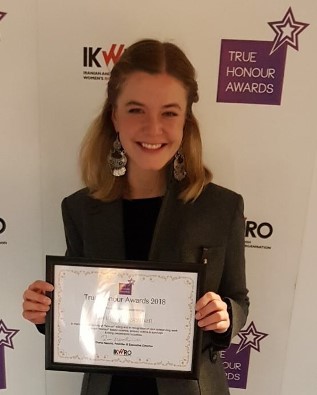 We are pleased to announce that Immigration Trainee Solicitor Lavinia Wasserman was a finalist at the Iranian and Kurdish Women’s Rights Organisation (IKWRO) True Honours Awards 2018.

The True Honours Awards recognise the vital work carried out by individuals and organisations to end ‘honour’ based violence and support survivors.

Lavinia was nominated by IKWRO and one of her recent clients for the award. Her client had experienced a number of traumatic events including trafficking and domestic abuse and was at risk of ‘honour’ based violence. Lavinia expertly handled her case, ensuring that she gained a full understanding of the client’s background and the risks she was facing. She ultimately achieved refugee status for the client and ensured she was fully supported throughout the process and helped her receive help for her mental health issues.

Lavinia joined Duncan Lewis Solicitors in 2015 and has an extensive knowledge of a wide range of immigration matters including asylum claims, deportation, false imprisonment, Dublin III removals and European Economic Area (EEA) applications. She frequently represents and assists some of the most vulnerable members of society including victims of trafficking, domestic abuse and victims of torture.

She is accredited as a Senior Caseworker under the Law Society’s Immigration and Asylum Accreditation Scheme which enables her to advise and assist both private paying and publically funded clients. Lavinia is an integral member of Duncan Lewis’ Immigration team in Dalston and represents clients across London.

“It was truly heartening to stand as a nominee with such an impressive group of women rights activists from all sectors. I am so grateful for the vital work of IKWRO in supporting in every way some of the most vulnerable women from Middle East and North African (MENA) countries.” Said Lavinia.

Duncan Lewis' Immigration department is ranked as a top-tier practice in Immigration: human rights, appeals and overstay matters in Legal 500 2017. As one of the UK’s leading firms of immigration specialists we are able to advise on business immigration and right to work in the UK, Tier-2 visa applications and appeals, student and graduate visas, spousal visas and visa overstays.

For urgent legal advice on immigration detention, call the Duncan Lewis Solicitors 24-Hour Emergency Helpline on 0333 772 0607, where an accredited immigration lawyer is available 24/7.