Awards and Recommendations for Vinita Templeton 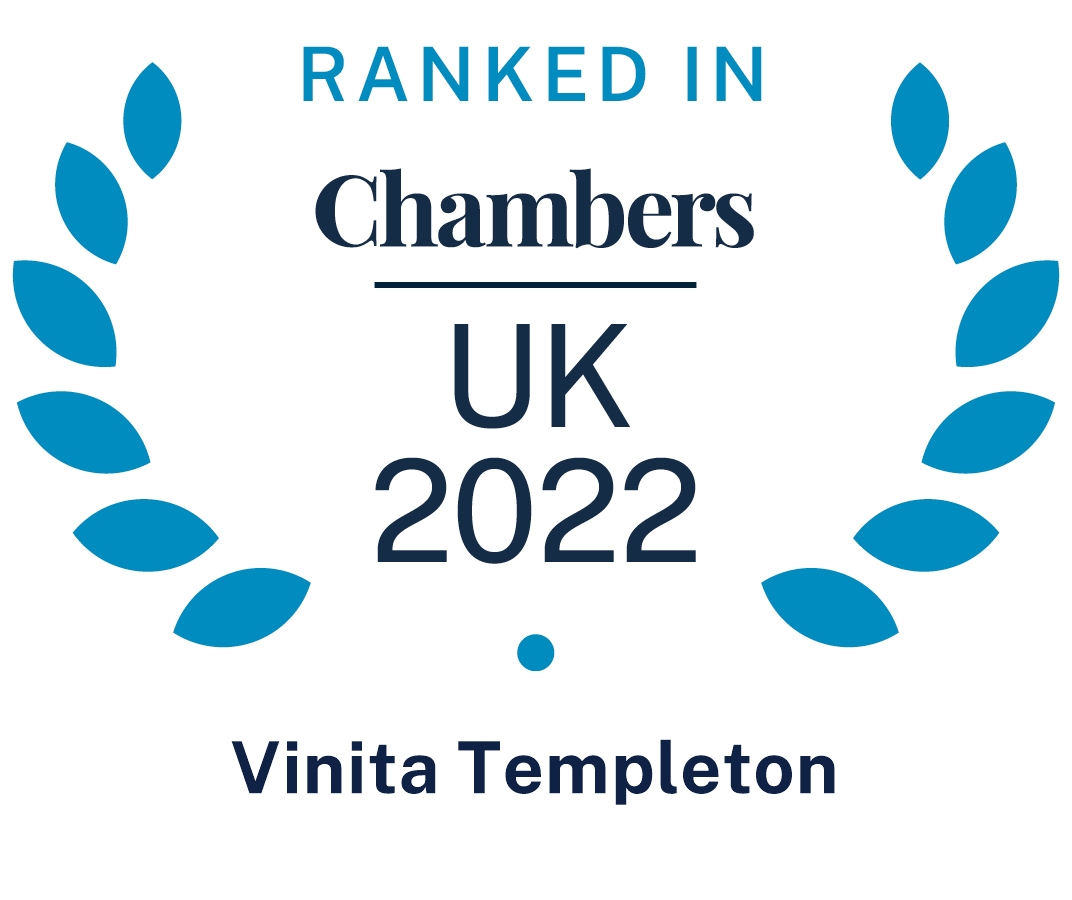 "Vinita Templeton demonstrates considerable expertise in judicial review challenges and strategic litigation in the asylum and immigration law sphere. 'She is very committed to her clients and goes the extra mile to provide services where funding is challenging.' 'A fantastic communicator.' 'She provides clear judgement and high-quality advice.'"

Vinita is ranked as a Leading Individual in the 2022 edition of The Legal 500.

"'Accessible and approachable' team head Vinita Templeton is appreciated for her 'compassion and willingness to think outside the box', enabling her to excel in handling many high-profile and challenging matters, including in judicial review proceedings for the victims of the Windrush scandal and Commonwealth veterans."

'Hardworking' team head Vinita Templeton is 'very knowledgeable and has a good relationship with Home Office employees', which she puts to use across a range of matters, including urgent and difficult judicial review claimant matters.

Vinita is a Recommended Lawyer in the 2021 edition of The Legal 500.

"Efficient, patient and reliable' team head Vinita Templeton excels at judicial review matters, and is regularly successful for private- and publicly-funded clients in cases where appeal rights had previously been exhausted."

Vinita is a Recommended Lawyer in the 2020 edition of The Legal 500.

Winner of the Special Recognition Award at the Wales Legal Awards

Vinita is ranked as a Leading Individual in the 2019 edition of The Legal 500 for her Human Resources: Immigration work in Cardiff.

"Ranked as a leading lawyer in her field, the empathetic, intelligent and professional Vinita Templeton has a well rounded knowledge of UK immigration laws."

Vinita is 'deeply committed to her client's interests' and is 'a specialist in immigration judicial review claims'."

Legal 500 2016 Edition.
Immigration: Human Rights, appeals & overstay / Wales: Cardiff
I am Director of Immigration and Public Law, based in the Swansea office. I specialise in a wide range of complex asylum, immigration and human rights matters, including cases involving vulnerable individuals such as victims of torture and human trafficking. I am ranked as a Leading Individual in the 2019 edition of The Legal 500.

I have a broad practice in Immigration Judicial Review claimant matters. I frequently achieve success for clients in challenging cases where appeal rights had previously exhausted. I have an excellent track record of turning around cases that have been deemed without merit. Due to strict legal aid rules, I often undertake extensive pro bono work before being able to secure legal aid funding in these cases. Some of these cases have resulted in changes to Home Office Policy, such as the Home Office policy on Discretionary Leave for victims of trafficking and also changes to policy relating to ex armed-forces personnel.

I have significant experience leading immigration appeal cases before the Upper Tribunal and the Higher Courts.

R oao Parvin Begum v SSHD PB (Bangladesh) - C4/2014/3023 - My client had been granted leave to remain recourse to public funds under the post 2012 change in immigration rules. We challenged the decision on account of her poor health and disability and the case was settled at the Judicial Review stage. The matter progressed to the Court of Appeal stage to litigate the issue of costs. The matter was settled with a favourable outcome before the date of hearing.

HS and Others [2012] EWHC 3126 (Admin) Case No: CO/6311/2011 - This was a CART Judicial Review claimant matter. This case where the decision provides clarification of how the second appeals test should be applied: On a substantive judicial review of the Upper Tribunal’s refusal of permission to appeal, Charles J considered that once permission has been granted in such a ‘Cart judicial review’ the second appeals test falls away and standard judicial review principles apply. Accordingly: (a) at the permission stage, the Court is to decide whether the second-tier appeals criteria are satisfied and not whether it is arguable that they will be satisfied at the substantive hearing; and so (b) if permission is granted on that basis (as with a second-tier appeal) the permission test is spent and is no longer the test to be applied at the substantive hearing. The timing of this decision coincided with when the 59th amendment of the Civil Procedure Rules came into force on 1 October 2012. LJ Charles decision remains of historical interest as it echoes the provisions within Cart Rule 54.7 which provides: "That the court will give permission to proceed only if it considers –

AB & Others (internet activity – state of evidence) Iran [2015] UKUT 257 (IAC) - My client was AB whose was a blogger and rap musician. This case established that social media users who have been critical of the Iranian regime may be at risk upon return to Iran, in the event of likely interrogation at the airport. The Upper Tribunal found that the use of the internet in an opportunistic way does not mean that an individual would not be at risk upon return. An individual’s social media activity is a factor that must be considered when assessing potential risks upon return.

HAA (s.72: overseas conviction) Somalia [2012] UKUT 366 (IAC) (10 October 2012) - This was an Upper Tribunal matter. The case was reported on the basis that in cases where s 72 of the Nationality, Immigration and Asylum Act 2002 is invoked, it is important to see that the specific requirements of that section have been complied with. In particular, if the conviction was outside the United Kingdom, there must be either proof of the offence and sentence (s 72(3)), or certification under s 72(4). It does not appear that the statute requires certification to be in the letter of refusal.

Rajbhandari (PBS: funds - available) Nepal [2012] UKUT 364 (IAC) (08 October 2012) - This was an appeal before the Upper Tribunal relating to a challenge against a refusal decision in respect of a Tier 1 (Post-study Work) Migrant. The case involved a consideration of the availability of funds in PBS cases. In this matter it was held that the notion that funds only need to be “available” to an applicant is, on the true construction of Appendix C of the Immigration Rules, applicable only to student applications.