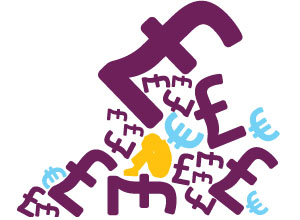 A recent study conducted found that adults in the UK are hiding more than £69 billion of debt from their partners. The figures suggested 8.3 million people have debts their partners have no knowledge about and are unaware of their partners spending habits.

The average person holds £8,293 of hidden debt from their partners with the survey finding that almost half a million people would not have started their current relationship if they were aware of their partner’s financial position.

The survey was conducted by the company Opinium on behalf of Direct Line Life Insurance, highlighting the vast amount of people who kept their debts a secret and often having a sense of dread when it came to discussing their finances with their partner.

The survey suggested that the largest amount of hidden debts was due to credit cards loans with around 5.6 million people owing an average of £2,109.

Approximately in the UK, almost 2.6 million people have hidden personal loan debt, with the average amount being £5,011. The total owed to friends and family is £15.6bn, which calculated to more than £8,000 owed per person.

The survey stated that 61% of married couples who were questioned said they would rather talk about their political beliefs than their financial situation, whereas 30% admitted they would be more willing to discuss about their “discriminatory views”.

Married couples who had hidden debts were twice as likely as others to not disclose their borrowing in order to avoid arguments, with 30% of those survey believed that it was none of their partner’s business.

“A conversation about your finances can be awkward and if you’ve got debt even somewhat distressing, but it’s important to ensure your partner is aware of your financial position, especially if you live together or are married, as they could be liable for any outstanding debts.

“Given so many people are hiding debts from their nearest and dearest, we’d suggest having these discussions as early as possible to make sure you are prepared.”

These findings were revealed after the Bank of England warned that the high level of household debt poses a risk to the UK’s financial stability.

Bank of England Deputy Governor, John Cunliffe stated, household debt is “quite high” by historical standards, “but within that there are areas that you do worry about. You worry about households that have high debt and could be badly affected in a recession,” he said.

We appreciate that unemployment, separation, sickness or bereavement are participating factors in an individual’s debt. If you want advice on how to make informed choices or help negotiating with your creditors to reduce monthly payments please contact Director Anthony directly on, 020 3114 1227 or via email on anthonyo@duncanlewis.com.

Our Debt department aims to improve the quality of your life by advising and assisting you with your debts. We help to give you the confidence that you can take action to stop bailiffs or county court judgements being issued, and that it is never too late to get help. We understand that each individual’s circumstances are different and we ensure that our advice will benefit you now and in the future.