In the wake of the Labour Party Conference we ask - is the UK a hostile immigration environment? (1 October 2018) 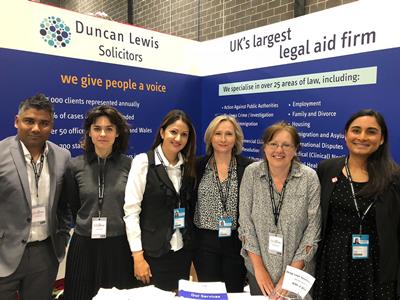 Toufique Hossain, Zofia Duszynska, Anthony Okumah, Rebecca Thomas, Nilma Shah, Lynda Reid, Tamara Smillie and I have returned from the Labour Party Conference 2018, where we spent an exciting 4 days meeting a number of prominent MPs and organisations who came to visit our stall at the Exhibition Hall. Now, we are taking time to reflect on what we have learnt from our time there, to help us better understand the issues that are affecting the communities we serve today.

The conference was held at the ACC Liverpool, and it hosted a number of talks, presentations and seminars dotted around the city and exhibition centre. I personally attended a number of these events in an effort to understand how people form their views on migration, which was a key topic at this years’ conference.

Labour proposed the following at the conference:

In the last 25 years there have been nine acts of parliament with a main focus on immigration. Further changes to the UK’s immigration policy have been introduced through statutory instruments such as the Immigration Rules. As a result, immigration law has become highly complex and this is a barrier to political accountability.

The Labour conference itself took place right after the MAC report (Migration Advisory Committee) was published in early September 2018. The MAC was asked to do the research in July 2017 by the then Home Secretary, Amber Rudd. It is thought it could shape the government's post-Brexit immigration policy.

Labour does not seem to agree with some of the recommendations made by the MAC report; in particular the suggestion from Universities to bring back the post-study work visa, which I wrote on earlier this month.

The interim Migration Advisory Committee (MAC) report, published 27 March 2018, summarises the responses to the latest immigration survey into European Economic Area (EEA) migrant labour in the UK. One of the conclusions of this report is that employers have increased employment of EEA migrant labour since new Member States joined in 2004, a marked change on the past. Before 2004, EEA migration was primarily highly-skilled workers. After 2004, inward migration to the UK from new Member States tended to be concentrated on lower-skilled jobs, as well as study work visas.

Labour backed the report, calling for an "end to discrimination" against non-EU migrants.

Under the current system, workers from the EEA - those from all EU countries including the UK, as well as Norway, Iceland and Lichtenstein - enjoy freedom of movement, meaning they are able to travel and work within the area without visas.

The MAC recommends a policy allowing greater access for higher-skilled migration while restricting access for lower-skilled workers. It suggests extending the current scheme for high-skilled non-EEA migrants - known as a Tier 2 visa - to those from EEA countries as well.

As part of this process, the cap on the total amount of workers allowed to enter under Tier 2 should be abolished and the range of jobs eligible for the visas expanded, the committee says.

Current policy is to allow 20,700 high-skilled workers into the UK each year on Tier 2 visas. Top priority is given to jobs on a shortage occupation list.

The current salary threshold for such visas is £30,000, which the report says should be retained.

But its proposal that there should be no visas made available for unskilled workers outside agriculture provoked alarm among business leaders, who said they needed access to a large labour pool to fill jobs in sectors such as construction, haulage and hospitality.

Theresa May’s cabinet has agreed a post-Brexit immigration system that will offer visas to immigrants in a tiered system based on skills and wealth; a flagship policy that is expected to be one of her key announcements at the Conservative Party Conference.

The Brexit negotiations update was held at the end of the cabinet meeting on Monday afternoon and the only person who referred to a Canada-style trade deal was the Prime Minister herself in her own presentation. She added that some EU heads of government were being more constructive than others behind the scenes, but did not specify which leaders. A white paper setting out the new immigration policy is due to be published later this autumn.

The Shadow Immigration Minister, Afzal Khan, believes that Tories are pushing for number gain. He feels that it is a hostile environment that we live in and we must bring unity. He calls for a fairer immigration system which benefits our community.

Labour leader, Jeremy Corbyn, called for party "unity" in the face of a possible early general election as he closed Labour's annual conference in Liverpool.

Author, Tamana Aziz, is a solicitor and Director of Immigration at Duncan Lewis, with an extensive caseload acting for individuals and businesses in a range of immigration matters.

Her practice includes immigration applications under EU law, business immigration under the Points Based System, complex appeals (including deportation and country guidance cases) in Immigration Tribunals, the High Court, Court of Appeal and the Supreme Court.